This is a pretty good place to practice self isolation. We are fortunate to have plenty of outside space and an endless list of things to be getting on with so we are rather grateful, all things considered.

It was before our trip back to England for Christmas when I last wrote about our life in Spain so, in that time, we have had three months to settle into our new home. Apparently it has been the warmest winter in Spain since 1989, and it has been mostly deliciously warm, but nightly temperatures remain cool and we have had memorable rain storms with gusting high winds. The house is designed for summer living so it doesn’t insulate well against the cold so we had air conditioning installed as soon as possible. This has made a difference but we still have thick blankets hanging over both front and back doors and continue to use the log fire regularly. It takes a little getting used to going from working in the garden, stripped off to just a pair of shorts, to wrapping up warm and lighting the fire for the cold hours of darkness. By this time last year I had been swimming in the sea, but currently we have more rain and wind, so we are eagerly waiting for the return of fair weather.

Thankfully the trees have withstood everything that Mother Nature has thrown at them. One or two are close to the house, others are next to the perimeter walls and electricity cables, so we were keen to have them tidied or removed. We have been told that we need permission to remove any trees or fines may be incurred so I have been back and forth to our local town hall. After much form filling and conversations with various people we’re still none the wiser. Initially I was met with blank looks when I asked the question at the town hall and it was obvious that nobody ever asks for permission to remove their own trees. However, trying to do the right thing, I completed the form that is required whenever you want to ask for information of any kind, and received a phone call several days later telling me to call a certain mobile number. Despite numerous attempts and voicemail messages there was no joy. “But you must keep trying and call at different times of the day” was the official response.

Having spoken to the local neighbours and tree surgeons, they have all said it’s not a problem. We have about fifteen trees. If we were to chop them all down there may be an issue, but to remove two or three problematic ones would be acceptable. Needless to say, that’s good enough for me, but anybody that knows my wife will realise that any such uncertainty or potential ‘rule breaking’ would cause mild panic.

In any case it may all be immaterial as I have been going around in circles trying to get somebody to provide a quote for the work. Two people have been recommended and contacted via local friends but both have said the job is too big, requiring specialist equipment for the removal of such large trees. Thankfully they both, independently, recommended another name who has visited and provided a quote, but that is now on hold due to the Covid 19 lockdown. In the meantime I had a caller at the door offering to take care of the trees and any other work that may need doing. He gave me an initial quote for the tree work, starting the very next day, which was declined. After a few moments of conversation this was reduced by €500. He was duly sent on his way but the very next day he phoned and his initial quote had lowered by €1500!

Sometimes I do wonder if we are actually living in Valencia or Merseyside. Clearing some of the garage space the other day I deposited all sorts of ancient junk by the bins across the road. Literally by the time I had returned to the garage somebody had stopped in their car, rummaged through the bins, and removed most of the items I had offloaded. The following day I had two cars stop at the gates as I was working outside. One offered paellero / barbecue hardware from the boot of a Seat, the other, two middle aged men in a very smart Mercedes offering Mastiff dogs for sale to protect my property! Having said that the up-cycling culture is a good thing; it’s good to think that little is wasted, and we have also recently taken advantage of some garden materials placed by local rubbish bins.

We have started to work on the garden and outside spaces, appreciating the simple pleasures of being located within the National Park of the Sierra Calderona, which is a large mountain range dominated by pine forests. We have planted orange, lemon and lime trees, and more recently some strawberries, carrots and lettuces which are thriving. I have also started a project to prepare for the inclusion of some chickens, having been inspired by some neighbourly friends of ours. The previous owner of our house had left a large, wooden dog kennel behind, which I have started to convert into a chicken coop. Unfortunately that project has ground to a halt as I need some more materials for the nesting boxes (and some chickens!) and am unable to buy them at the moment for obvious reasons!

Nevertheless the surrounding nature continues to keep us enthralled; from an immense ‘pollen drop’, covering everything in a thick layer of yellow dust for several days, to discovering some scary hornet nests in the paellero (which I removed whilst literally quaking in my work boots – I still have a disturbing phobia of such things!), to finding and removing nests of ‘procesiones’ (the processionary pine caterpillar), which are prevalent here. These insects have venomous hairs that provoke severe allergic reactions and are particularly dangerous to children and can kill dogs.

Plumbing attempts and hornet removal in the paellero 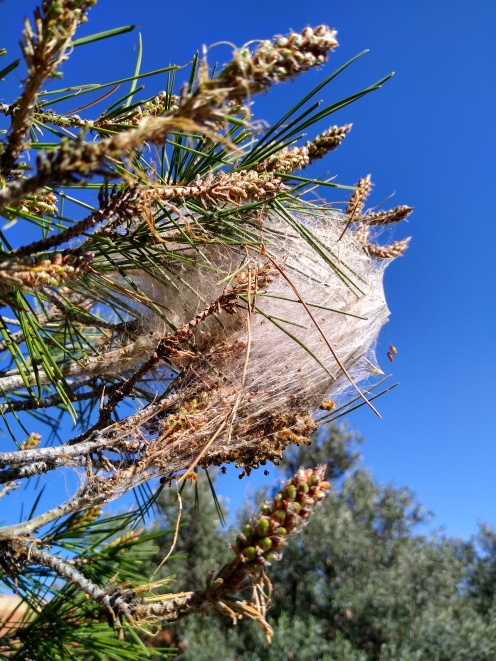 On a more positive note we seem to have a resident red squirrel in our garden. Whilst taking our daily ‘lockdown’ exercise, by walking laps around the house, the other day (unlike the UK we aren’t allowed out to exercise), we spotted the beautiful creature on one of our pine trees. He was at our eye level, no more than fifteen feet away, and after considering us for some moments we watched as he went up and down the tree, clambering and jumping among the branches, before descending again and skipping away on the ground before us. We have seen him on other occasions, high in the trees, but never in such close quarters. Today we found more evidence of his visits as several almonds have been picked, opened and discarded on the ground whilst still green and unripened.

There is still a consensus that the red squirrel is a pest as they have the potential to demolish fruit and nut supplies and damage tree bark. However there are no grey squirrels in Spain, and they have such an appealing appearance and are far fewer in number than their grey counterparts so we can’t help but be captivated by his presence.

So the garden will remain a haven for us for the coming weeks and months whilst we are in ‘lockdown’. All plans and quotes for renovation of the house, pool installation, tree surgery are on hold, as are travel plans and family visits.

We wish all of our friends and family around the world the very best of luck in these most unusual times. Stay positive, stay healthy and stay in touch.

Incredible views from a recent walk from our door 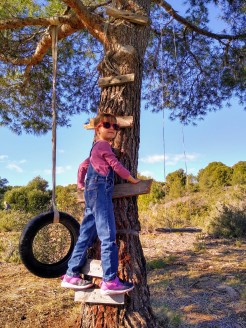 When life was normal and we could explore 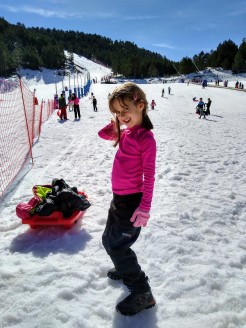 Simple pleasures that are now just a memory 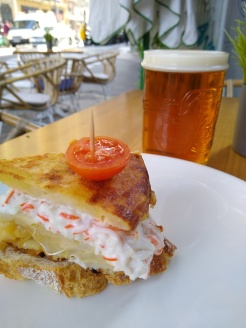 Simple pleasures that are now just a memory

11 thoughts on “The Good Life”

View all posts by thelegend1300