With winter behind us we are enjoying our first ever spring season in Spain and so far it is fantastic. The house is no longer cold and damp and daytime temperatures are perfect for enjoying an outdoor lifestyle without suffering heatstroke or being attacked by mosquitoes. We will certainly appreciate the next few weeks before the suffocating heat of summer arrives.

As we have been burrowing out of the cold and dark of winter Selena and I have worked hard on learning the language and I think it’s fair to say that we have both crossed a watershed moment in our understanding. That’s not to say that we are anywhere near fluent, but gradually we have risen from beginners to somewhere near basic conversational speakers. There’s still a very long way to go but we soon realised a simple truth. The only way to learn a language as an adult is by pure application! We were told many times “Don’t worry, when you live there you will learn the language really quickly” which is what I was relying on. I genuinely believed that a magical penny would drop and I would go from being a beginner to fluent in one easy step. In fact the stark reality was that I was becoming more confused and frustrated every day, especially given that the local dialect is Valenciano rather than Castellano. The only way that we have progressed is by daily study.

Gradually we are improving our comprehension and our vocabulary.

No doubt Lizzy will be teaching and correcting us before too long as she has quickly developed a discernible Spanish accent. It really seems strange to listen to her pronounce the names of her classmates and various Spanish phrases in an authentic and natural way.

It’s not all been plain sailing at school so far however. Although the first few weeks went by without a hitch she managed to catch a nasty bug that floored most pupils and staff. We all succumbed to the germs and suffered varying periods of bedbound inactivity, after which she lost her enthusiasm for her new life in education. All of a sudden I was being faced with a daily struggle each morning as I tried to get her dressed and out of the door, followed by tears as I delivered her to the school. How could things have changed so drastically? Needless to say it’s been a tough few weeks after such an easy start. To be fair, with no half term it’s been a very long straight ten weeks of school, and even Selena has found it difficult, until this week’s blessed long weekend for the Fallas festival!!

How do you begin to describe Fallas in Valencia? Advice has been polarised. Many people leave the city as it becomes too crowded and noisy, with roads closed, leaving locals unable to park or access their own homes in the normal fashion. Others have obviously extolled the virtues of the party atmosphere, the incredible sights of the Fallas constructions and the sheer noise of the mascletas and fireworks.

Having a four year old child in tow has meant that we haven’t ventured into the city by night over this festive period, but we did investigate by day. It was a real party atmosphere with swarms of people seeping from the train station and into the streets where there were various stalls and street performers, with barely room to pause or breathe.

The Fallas constructions are nothing short of incredible. The largest ones are the size of tower blocks and display amazing artwork and details. The time and money invested in their creation is staggering, especially considering that they will be burned to the ground in a matter of days. 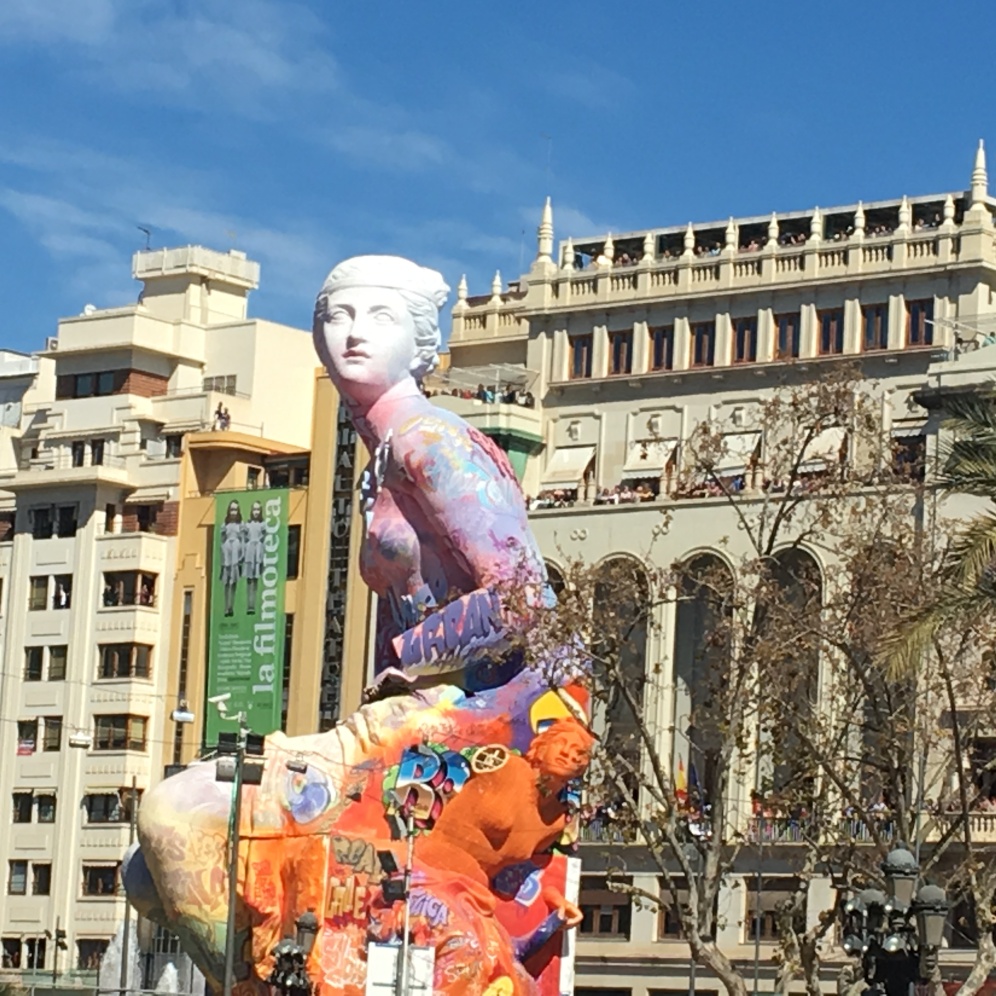 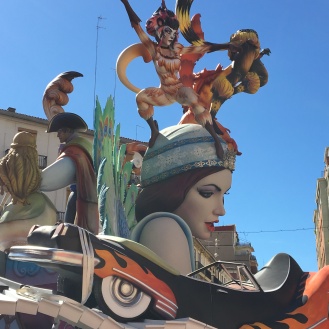 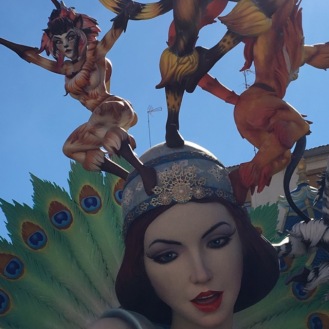 Every day during the week long Fallas celebration there is a 2pm ‘Mascleta’ (firecracker) display in the town hall square of the city. The noise can be heard for miles around, and people gather in the square for hours in advance to witness the spectacle. It’s all about the noise. The display only lasts for a few minutes but it builds into an amazing crescendo that pounds in your chest as the ground beneath your feet vibrates.

All of the towns and villages around the city also have their own Fallas celebrations and our little town has been partying hard for several days now. There are the Fallas constructions dotted around, which are also burnt down at the end of the fiesta, along with street parties and massive paellas being cooked in the streets. Fallas runs from 15th – 19th March. That’s five days of non-stop partying. It has to be seen to be believed. The fireworks are incessant. Each night they have partied until 3am. We have fallen asleep in bed to the sound of music, fireworks and celebration. Incredibly each morning at 7.30 we have been woken by the volley of more fireworks and they have started all over again, even on Sunday! We had a friend visiting last week who regularly jumped out of her skin as a random firework exploded but we’ve become desensitized and even Lizzy doesn’t flinch anymore, in fact she has been throwing ‘bangers’ around like there’s no tomorrow!

Did I say ‘tomorrow’? The festival comes to an end tonight and Selena and Lizzy return to work / school. In a few days we welcome more guests for the start of a very busy month of entertaining.

Many people have said that once retired they have struggled to comprehend how they ever had time for work! I now know how they feel.

Apart from the usual family activities and Fallas related happenings we have squeezed in a weekend away with some new Spanish friends and entertained visitors, and last weekend I took myself off to France to collect my motorbike. I flew to Bordeaux on the Saturday and travelled back through the Pyrenees on the bike over two days, returning to Valencia on the Tuesday. In the spirit of adventure I refused to take the direct route home, preferring a more scenic and time consuming road trip. It was the right choice. Although the hours in the saddle were long, the roads and scenery more than made up for my aches, pains and fatigue. The weather was surprisingly kind (I had planned my trip based on the Valencian weather rather than that of the Perigord or Pyrenean mountains!) so I was able to enjoy stunning scenery and quiet roads for most of the journey home. I remember being rather cold and weary, thanks to a hangover courtesy of my generous hosts, when I first saw the Pyrenees in the distance. Smothered in snow, and looking somewhat formidable, I wondered if I was up for the task, having been on the road for several hours already. As they drew nearer the clouds disappeared and the roads and views became increasingly majestic. Gradually my spirits lifted and I was able to enjoy the ride through the mountains without distraction. It was one of my favourite trips ever. Having said that, within a couple of hours I was in Spain and descending from the mountains on roads that just would not stop turning. I was so tired that my hands were becoming moulded to the handlebars and I yearned for a straight road. The bends were exhausting and my concentration levels were dropping dramatically. Frequently I would tuck in and allow cars to pass, slowing to a crawl, as I could not face negotiating the endless curves anymore. 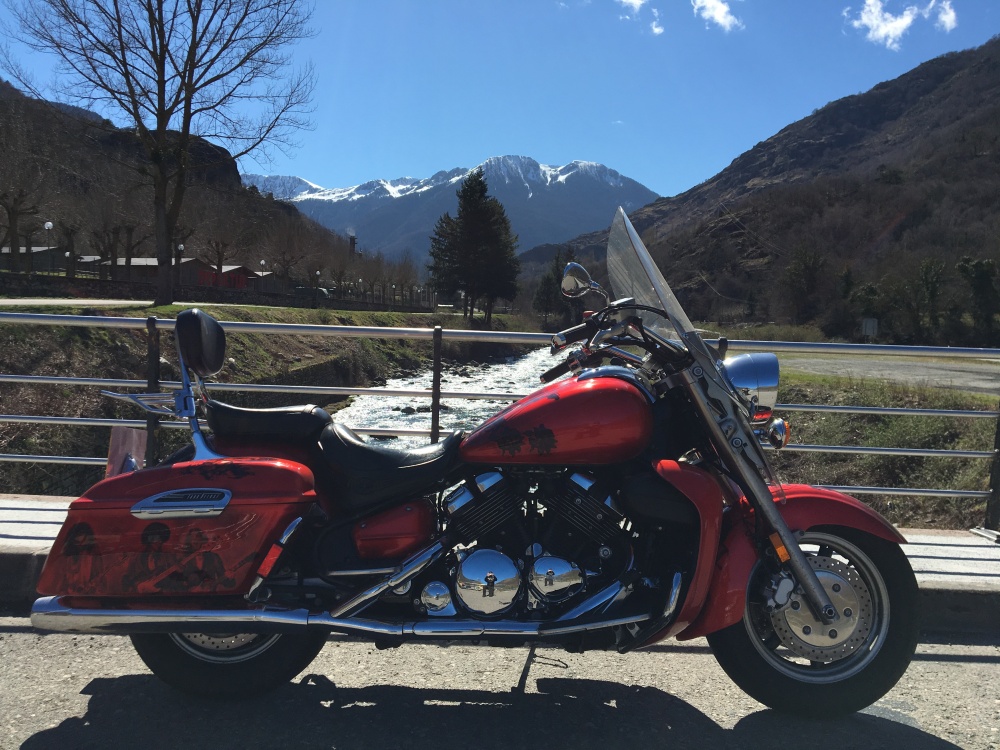 Eventually the road straightened out and I made it to my accommodation safely. After a forgettable night in a random Spanish village, where I got accused of being a gypsy, I was able to ride off towards the coast and the familiar sights of home. The bike is now safely under cover and I look forward to being able to get out again and explore the wider local area.

We have now been here for six months and I still find it hard to believe how much we have seen and done in that time. For now we will enjoy the beauty and warmth of spring, and look forward to receiving our visiting friends and family, before our summer break to the UK. 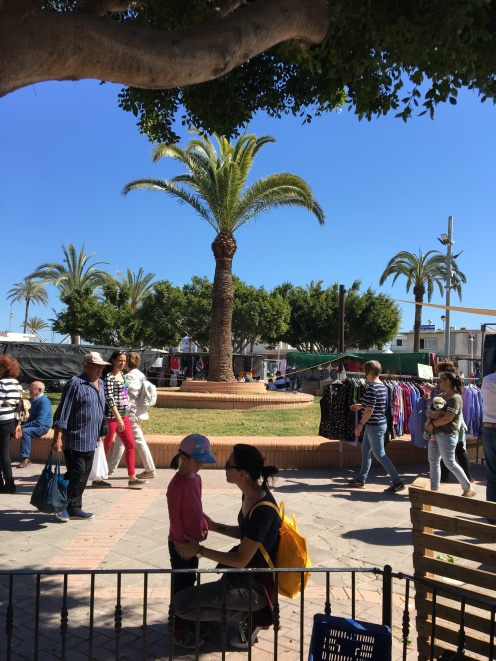 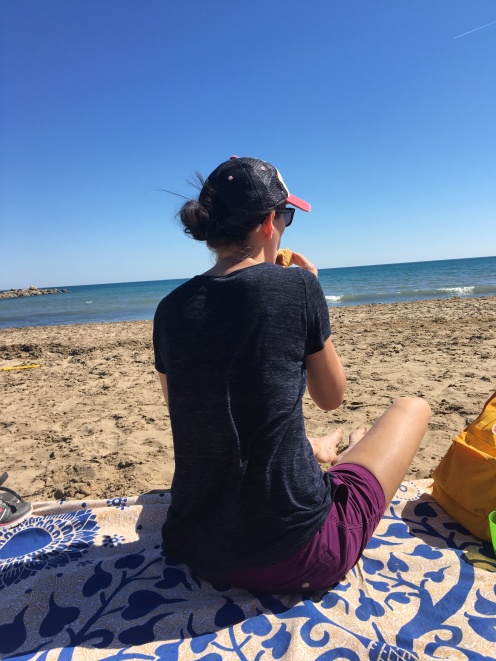 Glad to have beach days in mid March

View all posts by thelegend1300